When dealing with a web stack or AWS infrastructure, how are private instances that do NOT need a public IP address managed? It’s not an extremely difficult question. In many cases VPNs are used for this purpose. But what if a VPN isn’t needed? It’s arguably overkill and it can introduce a lot of overhead, creating multiple site-to-site VPNs and linking various regions together.

And that’s where this playbook comes in. All SSH traffic destined for private instances within the VPC is proxied through a single bastion host. This host acts as both the NAT gateway for internal instances and the SSH proxy for managing/configuring those instances. No VPN needed to the VPC, just pure SSH. 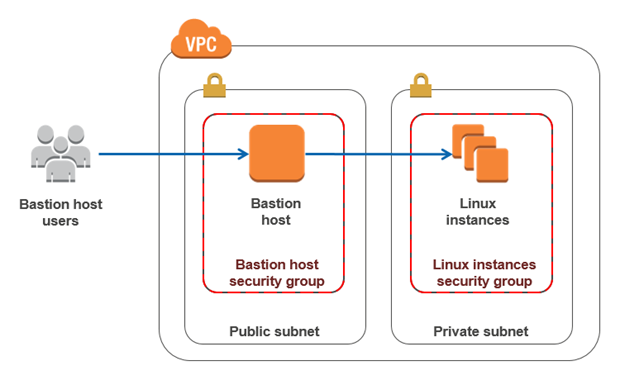 Another fun trick in this playbook is how to capture the SSH fingerprint and the corresponding SSH public key. When connecting to a new instance for the first time, how do you verify the SSH host key? How do you verify not being man-in-the-middle’d? A general way around this for Ansible users has been to disable host key verification. This is a not good idea and should be avoided at all costs. This playbook has a nice little method to get around that…

On to the meat.

The usual preamble. I build my playbooks as modular as possible; I wrap up everything, AWS secret and access keys included, into a vault file. This way I have one password file or password to protect. Makes it very modular.

I am currently using Ansible 2.1 for this playbook.

This playbook is a bit different than previous playbooks. I used to use a lot of implicit variables with host_vars and group_vars. This layout will load variables explicitly, using vars_files.

The playbook itself does the following:

Now for some of the highlights.

The first few roles create the VPC and gather facts about that VPC. Straightforward, really. The real interesting things happen when the role [aws.bastionhost](https://github.com/bonovoxly/playbook/tree/master/ansible-roles/aws.bastionhost) runs. The bastion host security group is created and tagged, as it needs to exist before the instance is created. The VPC subnet ID is retrieved using the ec2_vpc_subnet_facts module. The bastion host instance is created, with special note that the source/destination check is disabled:

Finally, the bastion_public_dns_name fact is set. This is used during the localhost.bastion_ssh_config, to configure the ~/.ssh/config file, and is passed into the role as bastion_vars.

This role configures the routing within the VPC. It verifies that there is an Internet gateway for the public subnets…

One funky issue that arises is if there is a black hole route (most likely from a deleted NAT instance), this error will occur:

Fastest way to fix this is to go to your private route and delete the Black Hole entry.

The first two tasks are initialization and cleanup. The real work begins when configuring the SSH proxy host. It uses blockinfile, as it seems that config lines in ~/.ssh/config cannot end with comments (while known_hosts can):

Once this completes, the ‘~/.ssh/config’ will have lines similar to this:

This frames the SSH config file in a marker, setting the SSH proxy command to tunnel all traffic destined for, say, ip-10-133-1-134.us-west-2.compute.internal through the public facing SSH bastion host. It uses the VPC variables and some splitting to link the VPC network with the proper proxy comand. It does this using a registered host key in AWS (while Secure access to internal resources without a VPN.

A problem to overcome is… how to deal with the SSH fingerprint/public key. When using an AMI image, especially Ubuntu sanctioned AMIs in this example, the SSH host key is generated upon boot. How do you know what the fingerprint is and thus accept the public key? Either it has to be blindly accepted or manually checked. That’s what this role takes care of.

Amazon has this handy feature called Get System Log. When an instance boots up, it actually writes the SSH host key to this output. And it’s available programatically! All that’s needed is some logic to handle the dynamic nature of the AWS infrastructure. 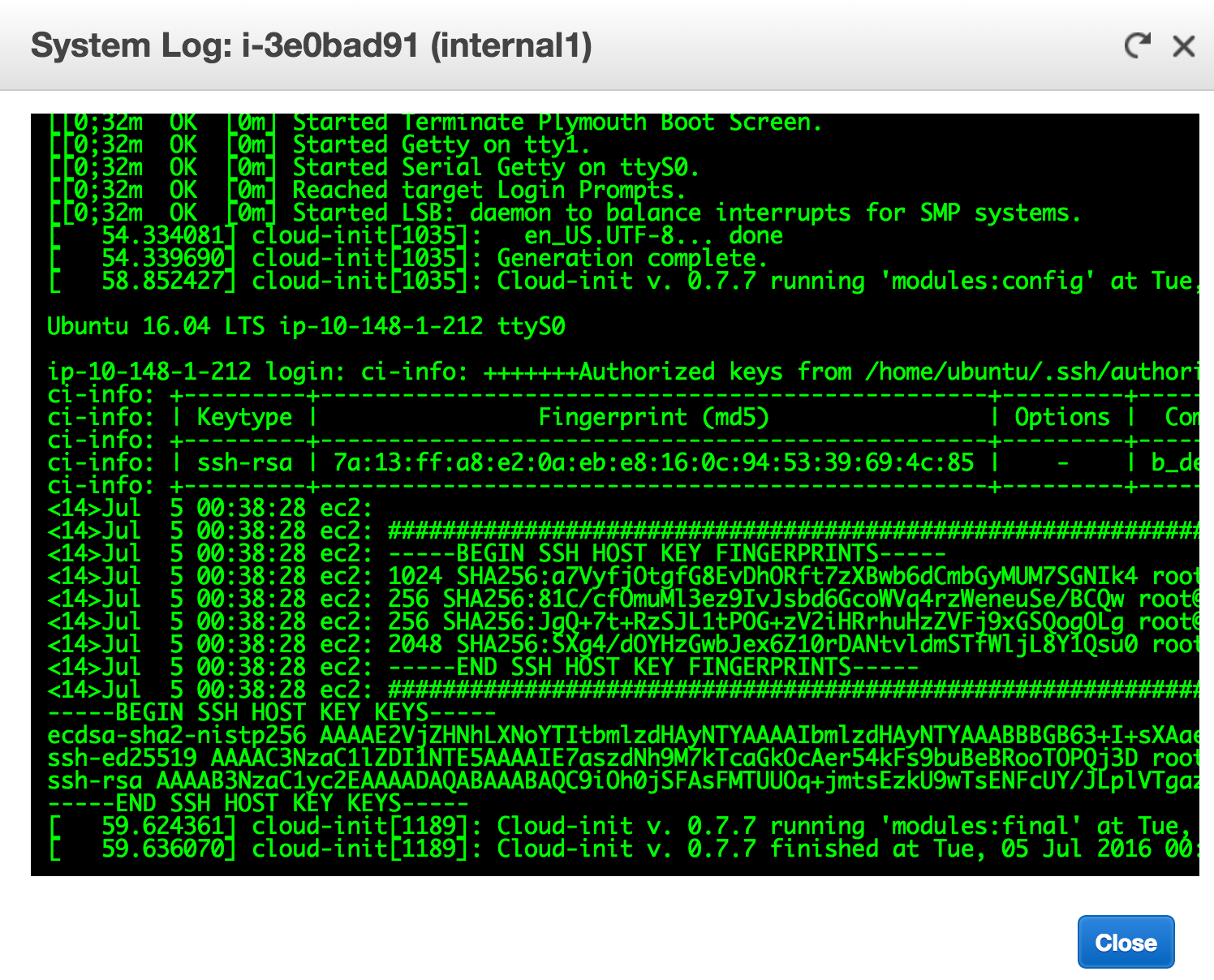 So all that’s needed is to get that data into Ansible (and make sure the SSH public key is echoed to the log after reboot or shutdown…).

First, the old known_hosts entries are cleaned (again, using the same marker from the localhost.bastion_ssh_config role), the real magic happens. AWS CLI has the ability to pull the Get System Log programatically:

This handy command is what grabs the public SSH key and registers it to a variable. Note that the extra awk. One problem with this method is that this data is ONLY printed to system log on first boot. Not too useful since it’s relied upon for every play. It won’t be found if there is a reboot. This is overcome later. On all instances, there is a role that adds a command to /etc/rc.local, which prints the SSH fingerprint to the AWS System Log on boot. A nice way to get around that limitation. :)

[Here’s a slightly deeper dive into the SSH fingerprint/public key problem in AWS.](https://blog.billyc.io/2016/07/05/securely-gathering-ssh-public-keys-from-the-aws-system-log/

Finally, we take the results of that SSH public key gathering and add BOTH the private DNS name and public DNS name, if it has one. Both entries are added to ~/.ssh/known_hosts.

The Ansible module, add_host is handy for dynamic inventories. It adds hosts to any group. This role has a few pre-configured tags that it will add hosts to, such as an instance’s Role:

So any instance with the internal_system will be configured via the private DNS address when internal_system_private is used as the host group in a playbook.

In this case, using the official Ubuntu AMI results in no Python being installed. Which is not very good when using Ansible. So this role is run to use the Ansible raw module to install all necessary Ansible prerequesites.

This role gets around the issue of the SSH public key not being in the AWS System Log on reboot. By hooking /etc/rc.local, the public key is available every boot.

This role configures the bastion host to act as a NAT interface, allowing outbound Internet access to all internal instances. It does this through installing and configuring iptables and enable IP forwarding for the instance via sysctl.

A playbook that deploys an AWS VPC, deploys a bastion host and internal instances, gathers the SSH public keys in a secure fashion and configures them, providing SSH access to the remote host without the need of VPN. This playbook can be extended to deploy an entire stack, everything from additional instance roles, to an ELB, to an Amazon RDS database. It’s just a start over what I found to be a weird problem.

some notes on errors

If you’re working through this playbook, and you see an error similar to:

A few things worth mentioning on how this can be improved.