I wanted to create a simple inventory website. I wanted to have a collection of information, including all systems, installed software on those systems, and any other relevent stats and details on those systems. The available tools out there, however, I didn’t really like. I just wanted a simple static HTML site, with possible some search features. Why not use some free software out there to generate my own?

With most inventory management solutions appearing meh, I thought about cooking up my own solution. Why not use Ansible to gather data, generate a Markdown formatted file, then use some static web page generator to generate the sit?. Afterwards, upload the generated content to an S3 bucket. With that, there’s easy reporting and searching of all software that needs to be updated. We can add more checks to it as well, but first, let’s just get a list of apt packages. So that’s what I built. An Ansible playbook that scans all available instances and creates a EC2 inventory and software inventory.

In the end it didn’t turn out half bad. Some screen shots…

First the index. Note it’s just 3 instances; an OpenVPN instance, a “DB” instance, and a “web” instance. Inventory page is generated when Hugo is run. Since lunr-hugo is installed, this is somewhat searchable.

Next, an instance. The Ansible playbook gathered EC2 facts, such as IP address and private DNS name. More can be gathered, this was just a start. After that, Ansible gathered the installed apt packages and if there’s an update for it. More software checks can be added, like checking for Docker imgs. 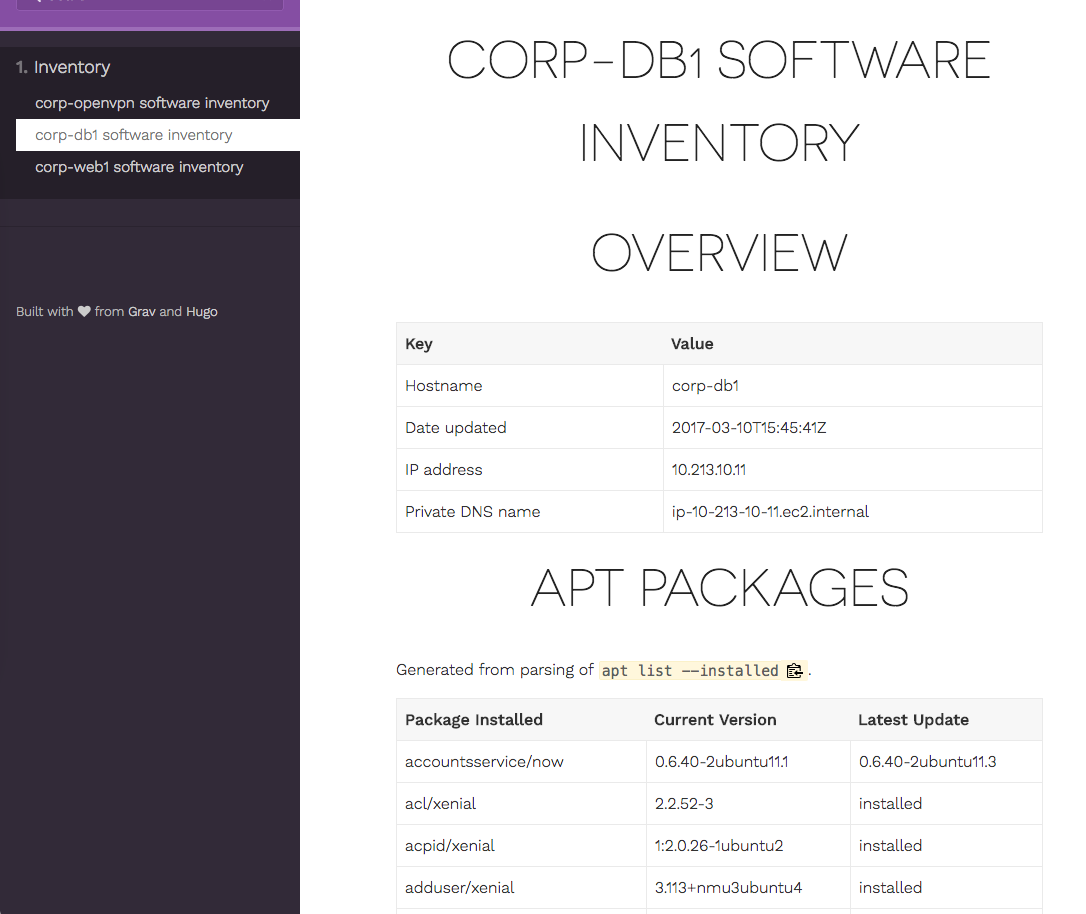 Not too shabby. Note that this playbook will find ALL instances based on the AWS tag named Environment, using the Ansible env variable. Now on some of the details of deploying this.

The Terraform files can be found here. In this case, I left the bucket public, to make a demo/proof of concept easier to play with. Obviously, in a real production environment, you won’t want this public. A couple files to modify include:

And with this, the test environment should be deployed. SSH to an instance (note, SSH proxy config is applied to ~/.ssh/config) if you are interested in verifying.

The real guts is the next step, the stuffs.yml playbook, which will gather the facts on all instances it finds with the Environment=corp AWS tag:

This runs a few roles:

And with that, a very simple inventory site has been generated.

I’m not really sure this is a good way to go. There are limitations to using a static website engine. But now someone potentially has a simple, effective start at gathering system inventory, a core tenant to managing infrastructure. It was a fun little PoC though, I might revisit it and improve it in the future.