2017-03-16 UPDATE - this is an old, unmanaged project. Use as a reference only. Mostly using Kubernetes now.

In certain scenarios, deploying Docker containers to infrastructure can be trickier than expected. Take an Elasticsearch, Logstash, Kibana (ELK) stack. Three docker containers, straight forward. Running a simple docker compose and our stack can be up without issue.

The problem arises when the systems are distributed; when you have multiple hosts running individual Docker containers.

There are plenty more. But the core issue is, why worry about where the container is running? Why not just throw a bunch of settings (docker-compose.yml) at something and let the orchestration happen? It’s a similar thought to VMs; there is no need to know about the underlying hardware. Docker containers can be the same. Why do we need to know about the underlying OS/system/network? How do we abstract away this level?

A tool is needed; and there are a couple of them:

There are others, to be sure. But the title of this post doesn’t include “Kubernetes” or “Swarm”. This is about Rancher.

A couple things worth noting. Rancher has a couple interesting built-in Docker stacks - Convoy/GlusterFS and a route53 stack. These two Rancher stack systems are provided with Rancher within it’s catalog, a collection of pre-configured Docker stacks. It’s a few mouse clicks away. With Convoy, we have a distributed filesystem for persistent storage and volume mounts available on EVERY host that a Docker container could run on. Convoy leverages the distributed filesystem, Glustefs to provide Docker volume mounts on all hosts. Route53 is a service that can publish DNS entries for every container that has a port exposed. Very handy. More cataloged stacks can be found here: https://github.com/rancher/rancher-catalog

Some cool features worth investigating. Time to automate. FYI, I’ve been working with Rancher for… 9 days. There’s a lot left to discover and there’s plenty to improve.

This user will be used by the Rancher system stack route53, which will maintain the internal DNS network. More on that later.

Here’s a quick overview of the steps to deploy Rancher:

One of the first things done to configure is creating and environment API token. This token is used for authentication for all actions performed against the Rancher server. This is done using the REST API (if the credentials file doesn’t exist):

The token is two keys in the format FIRSTONE:SECONDONE. An Ansible fact is created with this token for later use. The next step is to enable local authentication (if the credentials file doesn’t exist):

Local authentication enabled. The vault_vars.rancher.localAuthConfig will have the following format:

Stored in your vault. From here on out, the environment API token will be required.

Next we check for the existence of registration tokens. These tokens allow hosts to register with the Rancher server. Check, create if necessary, get the newly created token, and set the fact:

One thing to note, do NOT use name: rancher-agent. This will cause the Rancher agent startup to fail (it uses that name for the agent).

I wanted to include this to show another interaction with the Rancher REST API. Basically we’re just checking for a transition state:

I thought this was a cool step. Just waiting for the Rancher server to report all hosts have shown up, using the REST API. When they’re all up, the GUI will look like so: 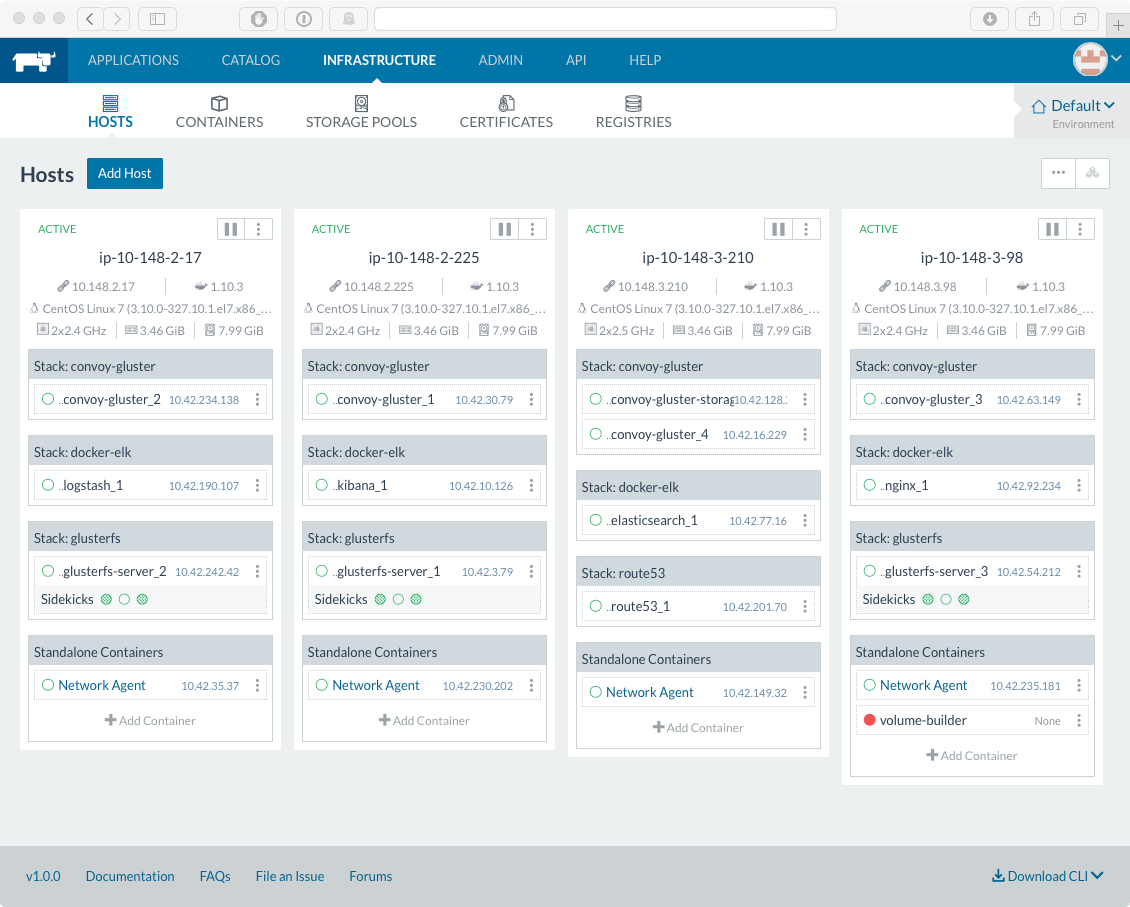 The GlusterFS stack and wait:

The rancher_vars.glusterfs variable can be found in host_vars/127.0.0.1/demo_aws_internal_rancher.yml. So how did I get construct this variable? Rancher provides this awesome functionality. ALL Rancher web GUI actions can be translated to API functions. It even provides a handy way of seeing the API. From the web interface, select ADMIN and then AUDIT LOG. You’ll see commands run. By clicking on the “i” next to the event, we can see the API call.

So once we manually deploy the GlusterFS stack from the CATALOG menu item, we can see the API: 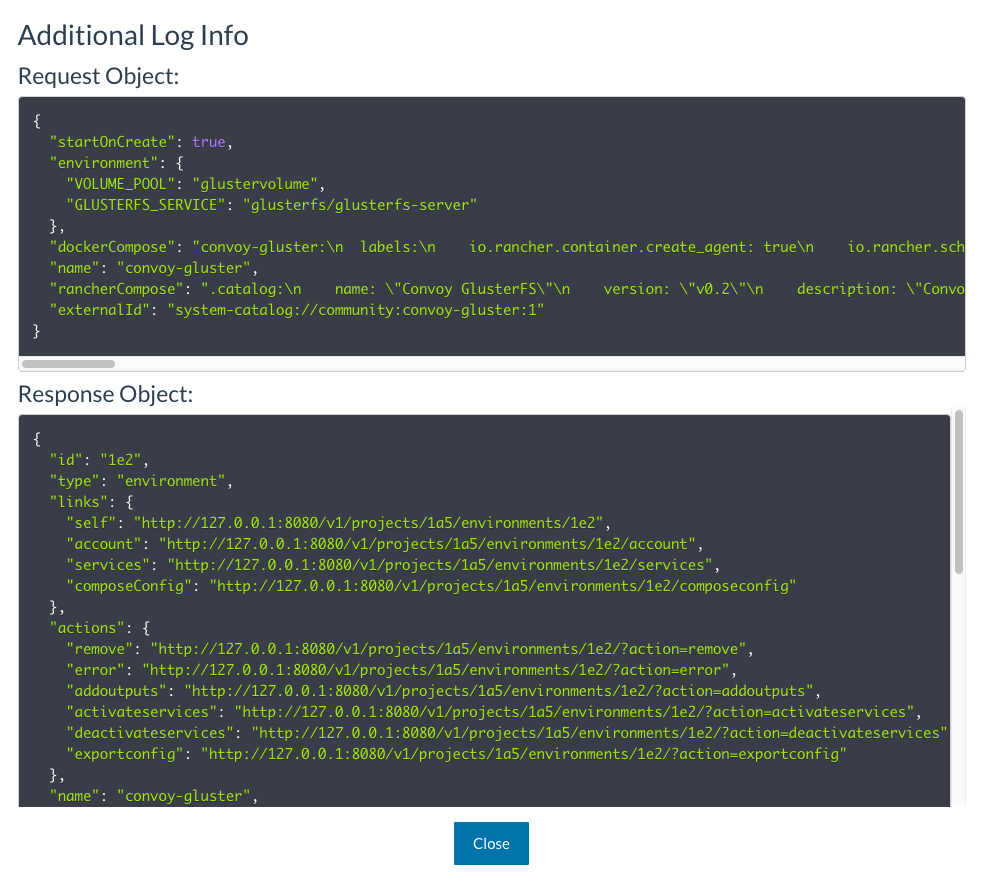 Pretty cool. After that we do the same for Convoy:

Finally, we do a quick check to see if the volumes have been created. If they haven’t, create them:

Distributed filesystem created. One really awesome thing to note, all new Rancher hosts after this get a convoy-gluster docker container. Nice trick.

Having a docker based distributed file system is great and all but… How does data even get on this thing? There are convoy command-line tools. You can also create a Docker instance that has a sole purpose to get data on there. That’s the way I went. Ansible copies the files to the system, verifies volume-builder hasn’t already run, then builds and runs the volume-builder docker container. Once finished, Rancher’s Storage System will be populated: 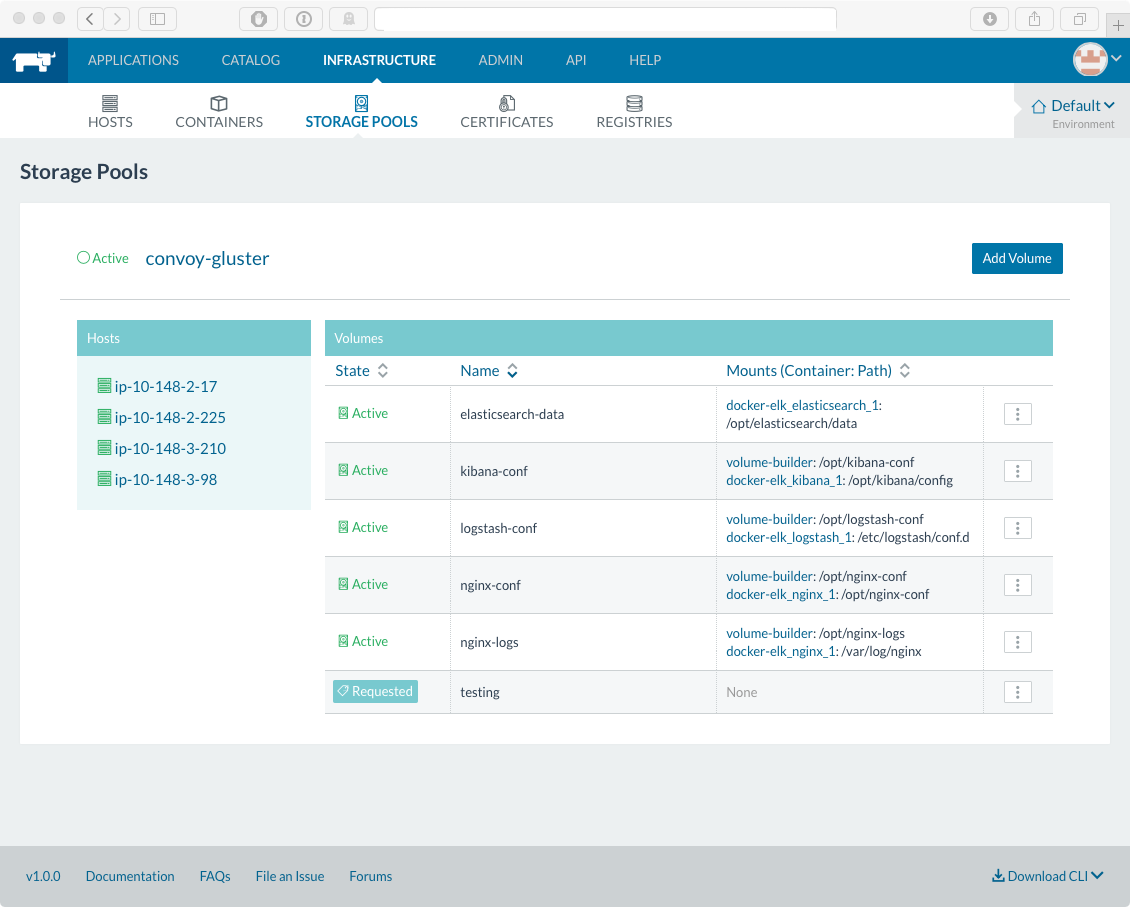 Route53 was a catalog provided container. Straightfoward, similar to GlusterFS and Convoy. This variable is stored in vault, as it contains AWS credentials.

Data sources in Elasticsearch require templates in order to properly organize and parse the data. So we need to get to that host and run a few curl commands to import templates and settings. But… which host is the Elasticsearch Docker container running on?

That’s where the route53 system stack helps. It’s busy updating the internal DNS for that stack, in that account. The route53 stack will add DNS entries for all Docker containers that have exposed ports. 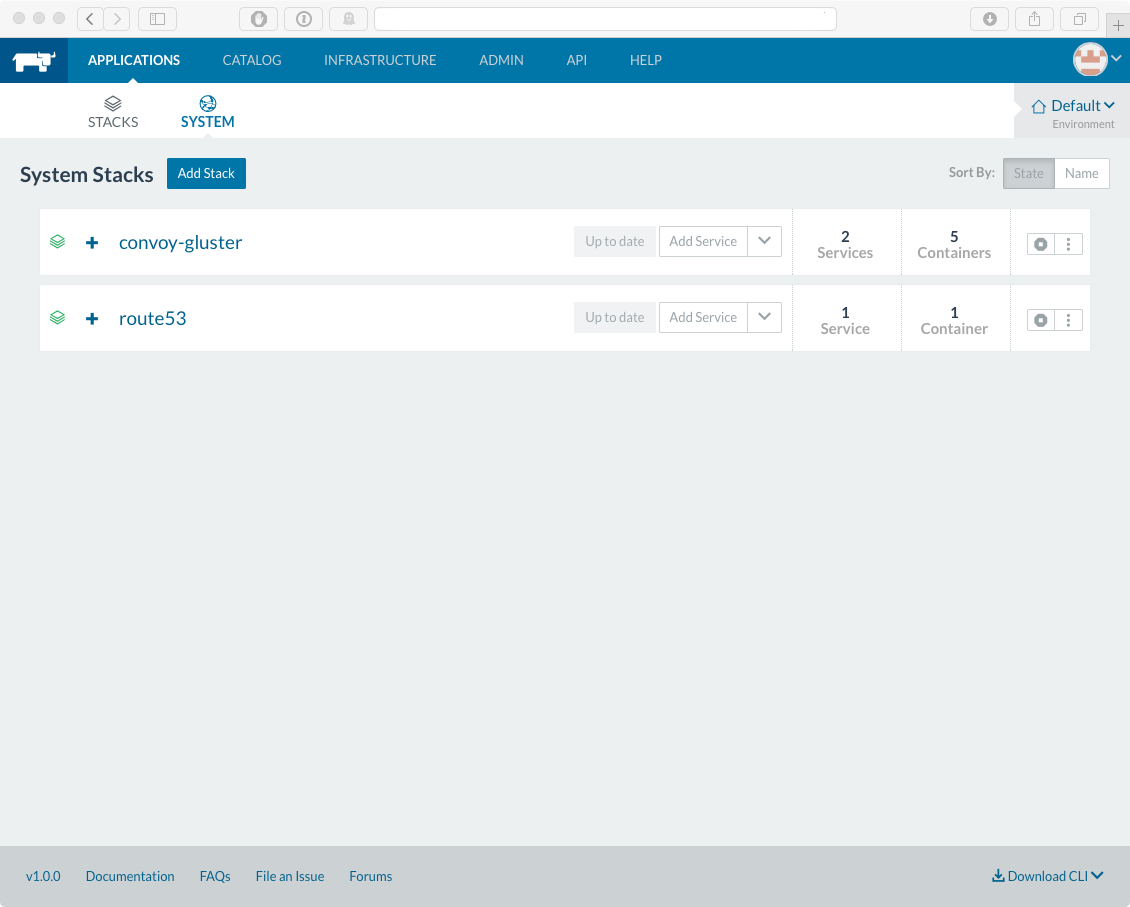 And that’s how Elasticsearch is found - using the route53 system stack.

Find all the zones, find all records within the internal zone that was created earlier (the role aws.route53), set the IP address fact, and finally construct the private DNS fact. Add the host to an Ansible group and it can be accessed!

Nothing too crazy here, just worth noting. In order to properly process the beats (topbeat and filebeat) data, the Elasticsearch templates are imported. The default beats dashboards are pretty nice as well and at the very least provide a start for creating custom dashboards. Finally, the default index is configured.

It’s a bit of a beastly playbook, but this is what we end up with: 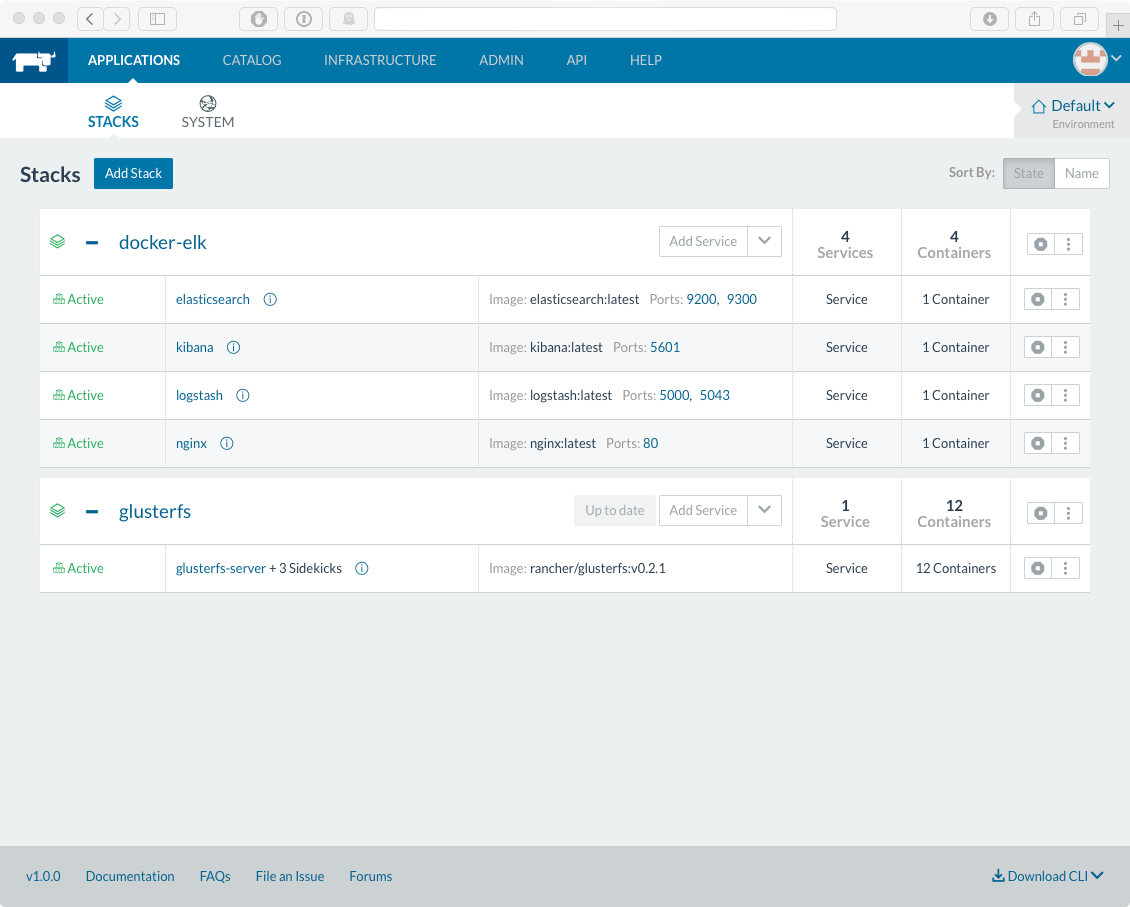 Some ways to improve this playbook: