In a previous post, I walked through an infrastructure deployment of a Kubernetes stack to AWS.. I have come back to it a few times, attempting to clean up the documentation, clean up the process, and improving the accessibility of the overall project. This time, I wanted to modernize it to match the current major release of Kubernetes. But there were other reasons and by modernizing this, it would allow me to explore some interesting topics like NGINX ingress controllers, Prometheus, OAuth integration, Istio, Helm, and Kubernetes Operators.

This blog post will cover the deployment of Kubernetes 1.7 to AWS. It walks through the following:

I tried to break up the steps this time, to help support different environments and simplify things. Already have a VPC infrastructure? It’s possible to tweak the Kubernetes Terraform settings and variables to shoe-horn it into that existing infrastructure.

In the end, the Kubernetes infrastructure will look like this: 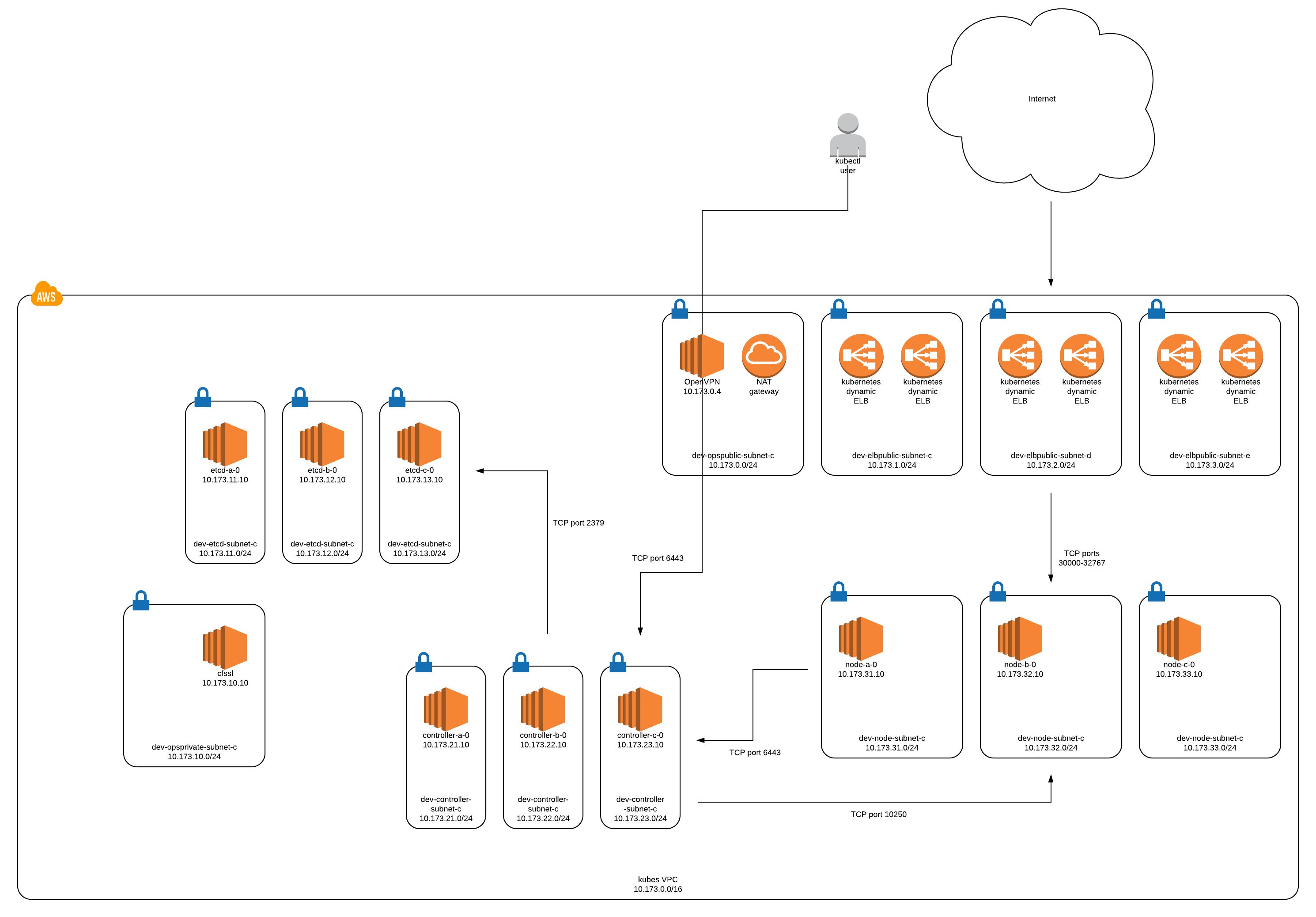 To deploy it, the following Github repositories are used:

The following steps bounce back and forth between repos.

important variables and settings of note

There are a few configurations, settings, and defaults that are important to note. For Terraform, there are two variables files that are relevent (the AWS and Kubernetes variables):

Make sure both match. It might be simplier to symlink this in the future…

Ansible will require matching settings. These can be found in the inventory file:

Some other general notes:

deploying and configuring the OpenVPN instance

Once the Terraform is complete, gather the Elastic IP that was associated with the OpenVPN instance. Edit the Ansible inventory file (inventory/dev-kubernetes-1.7/inventory) and modify the openvpn-public group (change the ELASTICIPHERE), setting it to the newly created Elastic IP address.

It is recommended to scrape the AWS system log to get the public IP address (post about it here):

Now to configure the OpenVPN instance (in this example it is a split tunnel VPN, tunneling only traffic to the 10.173 network through the VPN):

Import the OpenVPN profile (it is copied to the Desktop). Connect using any OpenVPN software (such as Tunnelblick for OS X, Ubuntu supports OpenVPN natively).

Back to Terraform in order to deploy all the components required to run Kubernetes in AWS. As the README.md describes, this Terraform project deploys:

CFSSL takes care of the TLS certificate generation for the various components of Kubernetes. This playbook configures CFSSL to run in a Docker container on a dedicated CFSSL instance. This serves as an internal PKI server (poor man’s Hashicorp Vault).

Again, it is recommended to scrap the AWS system log to get the public SSH keys:

Once finished, the kubectl config file (serviceaccount.kubeconfig) is saved in root’s home directory on the Kubernetes controller instances. Copy this to your local system (~/.kube/config) and test accordingly.

There it is, Kubernetes 1.7.3, with some extras like OpenVPN and CFSSL. It has everything needed to get started with Kubernetes.