I’ve been really into Cryptocurrencies a lot lately. I don’t know what the future will hold, but the idea of decentralized trust and the potential around all things blockchain is really exciting. I’m often tracking what is going on and what these new financial markets are up to. One site I visit quite often is https://coinmarketcap.com. As I looked at their interface, I couldn’t help but think that a lot of this data would fit into a Prometheus/Grafana stack. I use Prometheus/Alertmanager/Grafana a lot. I’m a big fan of the tool. Prometheus is a monitoring server and after coming from things like Nagios and Icinga, it’s refreshingly clean and simple. All Prometheus does is essentially curl an endpoint, gets a list of items and their current numerical value (like, CPU=.55, or 55%), then stores it. This numerical data can then be used to build charts, graphs, and other visualizations.

When coupled with Grafana, you can take that time series data and create some great metrics on it.

And that’s where this idea came from. Why not create an HTTP endpoint that would give me the price of these Cryptocurrencies in USD and all the other potential metrics? From that, I could write custom queries against that data and build dashboards like the simple one above?

This post walks through the coinmarketcap-exporter code. It covers:

And this example visualization when it’s all said and done: 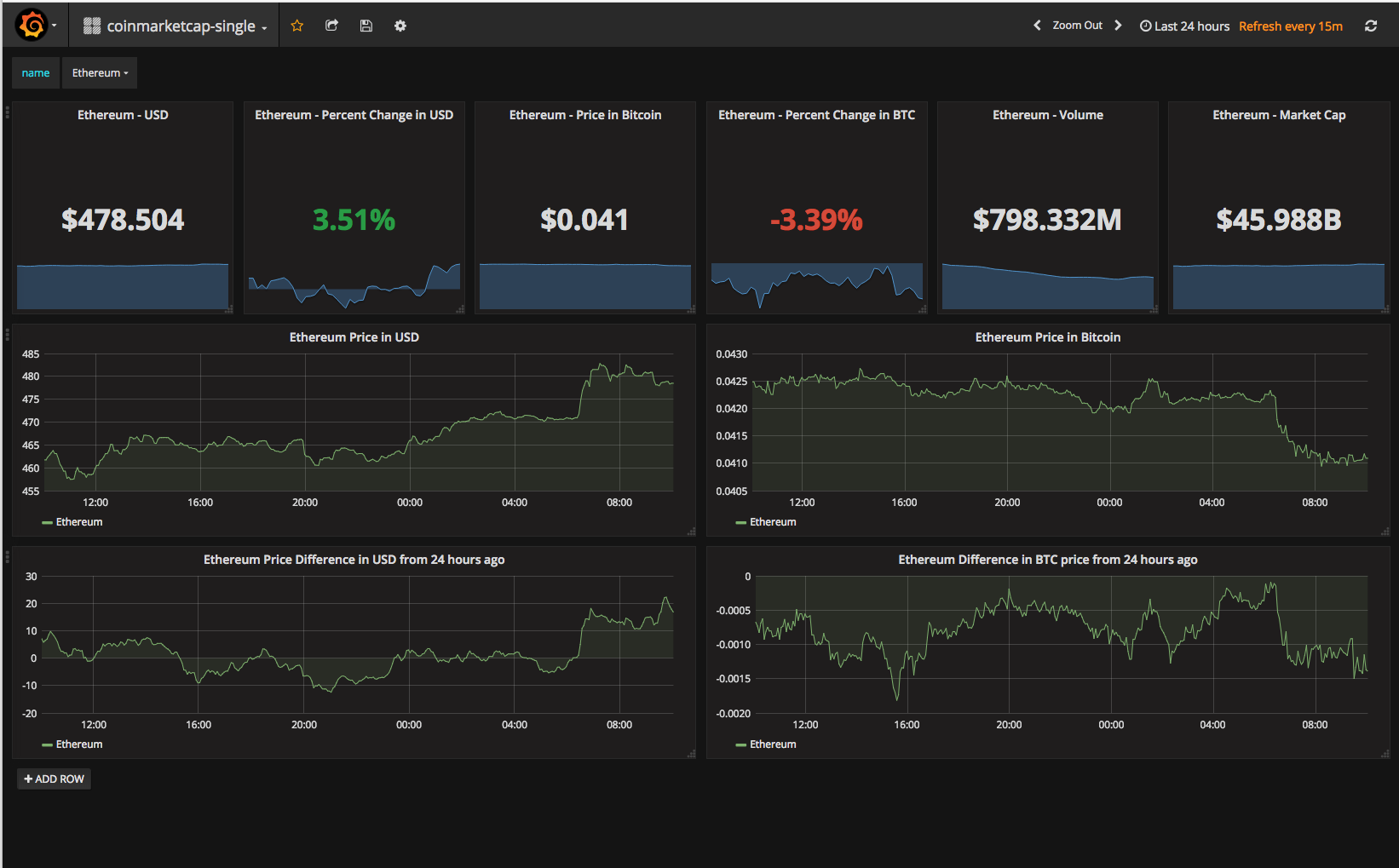 Here’s a look at some of the code.

Shout out to the crew running https://coinmarketcap.com, love this site. Scraping the API with Python was pretty straightforward:

The Coinmarketcap.com API returns straightfoward JSON and their sample response was incredibly helpful. From their API site, this looks something like this:

The above Python code gathers this response. From the above code, we can output the symbol for each coin:

Now we can create some Prometheus metrics.

The first metric collected is the amount of time it takes Coinmarketcap to respond:

I’ve seen it usually take about .2 to .5 seconds (it obviously varies). A niceity to measure. It was a good first test as the exporter was being developed.

Basically, for each Cryptocurrency scraped, take each metric that we want to observe, and walk through those, adding them all the to sample.

In the Prometheus model, the server scrapes endpoints/exporters. The exporters job is to simply gather the data and present it as HTTP to whatever centralized monitoring server there is. Now the exporter needs to provide this endpoint. With the Prometheus Python client, it’s super simple…

The args.port is a TCP port that is passed in on the CLI and defaults to 9101.

If the exporter is accessed using curl, the HTTP response would look something like this:

Getting Prometheus to scrape the endpoint is straightforward. The prometheus.yml configuration looks like:

Note, the above Prometheus configuration is from the prometheus-compose directory.

Part of the docker-compose stack is Grafana. Grafana provides a way for visualization of the Prometheus data gathered from the coinmarketcap exporter. It uses localhost ports 3000 and 9090.

Overall it was fun to work through some of the tricks of setting up a Python Prometheus exporter. Some of the big value is using that collected data to measure, graph, and configure alerting. It will be useful for future development. Really appreciative of Coinmarketcap and their API, the entire site is smooth and responsive.